1862 -- At the request of King Kamehameha IV and Queen Emma for the establishment of an English church in Hawai‘i, the Church of England sent Bishop Thomas Nettleship Staley, Archdeacon George Mason and Rev. Edmund Ibbotson to Hawai‘i in 1862. Before long these Anglican missionaries, with the patronage of the King and Queen, founded what would become ‘Iolani School.

1863-1871 -- Over the first few years, boarding and day schools for boys were started. In 1863, St. Alban's College in Pauoa, O‘ahu was established. In late 1863 or in 1864, a school was started in Lahaina, Maui following the establishment of a mission on the island. The Lahaina schools were sometimes referred to as Luaehu and Lahainalalo. The Lahaina school merged with St. Alban's on O‘ahu in 1868. By 1871, the name ‘Iolani was applied to the school. St. Alban's separated and continued independently, until about 1887. 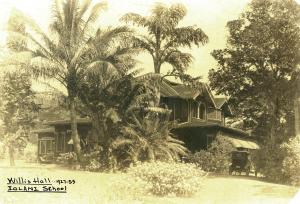 1872 -- Bishop Alfred Willis arrived and soon moved the school to his Bates Street property in Nu‘uanu. The name of the school was ‘Iolani College but was often referred to as the Bishop's College School.
Student Curtis Iaukea finished his studies. He later became chamberlain to the king, secretary of foreign affairs and an ambassador. Later students included David (later Prince David) Kawānanakoa Piʻikoi and Prince Jonah Kūhiō Kalaniana‘ole, who subsequently served as a congressional delegate.

1879 -- Tai Chu entered ‘Iolani and attended until graduating in 1882. Classmate C. K. Ai called him Sun Tai-Cheong. Later, he was known as Dr. Sun Yat-sen, the Father of Modern China.

1889 -- ‘Iolani was in the Junior Baseball League playing matches against Honolulu schools. By 1900 ‘Iolani had a football team.

1900 -- ‘Iolani College Magazine was published for school and alumni.

1902 -- With the departure of Bishop Willis, the diocese and school came under American Episcopal jurisdiction. The school moved to the Pro-Cathedral.

1903 -- Armstrong House, near the cathedral, was rented to house the boarders. In 1905, the bishop purchased it for the school.

1906 -- Mr. J.B. Morgan became principal of ‘Iolani School in August. He organized the school into the American system. A high school was started but later discontinued. In 1914, two years of high school started again.

1917 -- The first commencement was held in June. There were four 12th grade graduates and 16 eighth grade graduates.
In October ‘Iolani played a football game with McKinley High School. It was the first time that the school colors -- blue and white -- appeared on a football field.

1918 -- The school struggled with debts and inadequate facilities and there was the possibility the school might have to be discontinued. The school was out of debt by 1923.

1921 -- The new bishop, The Right Rev. John D. La Mothe, planned a reorganization of ‘Iolani, including a junior high school department and a revised curriculum with modern textbooks. He raised money and before the end of the year four classrooms were erected.

1921 -- Miss Roberta Caldwell became acting principal in November. She is the only woman known to head the school.

1922 -- A school newspaper, The ‘Iolani Newsette, started publication in the fall. The name was changed to The Inlook in 1925 and became Imua ‘Iolani in November of 1933.

1924 -- The first yearbook, Ka Mo‘olelo O ‘Iolani, was published by students. The school announced all future teachers must be college graduates.

1927 -- In September, ‘Iolani School opened on about five and one-half acres in Nu‘uanu at Craigside Place and the corner of Nu‘uanu and Judd Streets. The Old Davies house on the property was renamed Willis Hall.

1930 -- As a memorial to Bishop La Mothe an endowment fund was started to pay for land and buildings.

1932 -- The Rev. Kenneth A. Bray became Director of Athletics in September. He improved the athletic program and inspired athletes and future generations of the school with his sportsmanship and “One Team” philosophy.

1934 -- Reorganization and cataloging of the library by Dr. Mildred Staley takes place. In addition, a new tennis court is completed, a Junior League Football Championship is won and the Stone family moved from Willis Hall to a new $10,000 residence.

1935 -- Iaukea Hall, a dormitory named after alumnus Curtis Iaukea, was erected in the summer. In the fall ‘Iolani joined the Interscholastic League. As a result the school colors were changed from blue and white to red, black and white.

1936 -- Three new classrooms were built during the summer and a bungalow, previously used by staff, was remodeled into an infirmary. By the fall of 1936 the football team was called "The Crimson Tide."

1942 -- After the bombing of Pearl Harbor the school closed temporarily. It reopened in February with many of the faculty gone. There were only grades one through eight, although 34 seniors were tutored and received diplomas in June. There were no graduating classes for the remainder of the war. ‘Iolani was incorporated during the year.

1946 -- Classes for first through sixth graders began at the Ala Wai campus in November. Seventh through 12th grade classes continued at the Nu‘uanu campus through the 1953 school year. A bon fire was held at a football rally.

1948 -- The Parent Teacher Group sponsored the ‘Iolani Fun Festival (forerunner to the carnival and fair). It was held at the Ala Wai campus in April and made a profit of $7,000.

1950-51 -- Triple Crown in the Interscholastic League of Honolulu: football, basketball, and baseball championships.

1955 -- The Episcopal Church held its 58th General Convention on Oahu and ‘Iolani facilities were used. Bishops planted and named shower and monkeypod trees on campus including along the main drive, known since as Convention Drive.

1959 -- The Student Center was completed and dedicated May 19, 1959.
In June, Rev. Burton A. MacLean became Headmaster.
‘Iolani closed its boarding program and became solely a day school starting in the fall of 1959. The dormitory was converted into apartments for faculty.

1960 --The first issue of ‘Iolani Bulletin was distributed to all school alumni. (The current title of the magazine is the ‘Iolani School Bulletin.)

1962-63 -- The first official event marking the celebration of ‘Iolani's Centennial Year was the dedication of ‘Iolani's new athletic complex on Oct. 8, 1962. The retired Archbishop of Canterbury, the Most Reverend Geoffrey Francis Fisher, officiated. The new athletic complex included a new gymnasium, swimming pool, tennis courts, locker rooms, weightlifting room, athletic office, and improvements to the track facilities. Many other events marked the centennial including a convocation and ball. A golf exhibition drew such celebrities as golfers Sam Snead and Jimmy Demaret and entertainers Bing Crosby and Fred MacMurray.

1964 -- The rowing team went to the Olympic trials, and became the first high school crew to reach the finals in U.S. Olympic Rowing competition.

1966 -- In the summer of 1966, construction began in the Upper School on the Library-Learning Center (including an 154-seat amphitheatre, audio-visual facilities, a language laboratory, conference rooms and faculty lounge), and Upper School Classroom Wing with 10 classrooms.

1973 -- Castle Foundation donated land in Windward Oahu valued at $17.2 million to the school.

1976 -- After old buildings on the mauka side of Convention Drive were razed, construction began on the Royal ‘Iolani Condominium and a two-story school building--later called the Castle Building--that would include the Music Department.

1979 -- ‘Iolani became coeducational with the addition of girls in the 7th and 9th grades.

1983 -- The Most Reverend and Right Honorable Robert A. K. Runcie, the Archbishop of Canterbury, visited the school.

1985 -- His Excellency Li Xiannian, President of the People's Republic of China, visited the school on July 30, 1985.
The ‘Iolani Ohana K-12 parent group was formed in the Fall, to foster "a One Team spirit."

1989 -- ‘Iolani celebrated its 125th anniversary with the dedication of the Nangaku Building, a greenhouse, athletic wing, and Olympic size pool, along with a symposium on March 3, 1989.

1991 -- Following an invitation, the ‘Iolani Concert Orchestra made its debut performance at Carnegie Hall on March 29, 1991.
The dedication of the Eddie Hamada Track and Field was held on Sept. 27, 1991.
The Lower School Ai building was dedicated Oct. 24, 1991. It was funded by a $1 million gift made in 1990 by David Ai in memory of his parents.

2003 -- The Harry & Jeanette Weinberg Building and Kozuki Stadium were dedicated in October.

2013 -- The dedication of the Sullivan Center for Innovation and Leadership was held on Oct. 11, 2013. Guy Kawasaki '72 was the keynote speaker.
To commemorate ‘Iolani School's 150th anniversary, a fundraising gala event "At Thy Call We Gather: A Sesquicentennial Celebration of Teaching" was held on Oct. 12, 2013. The on-campus gala honored the commitment and dedication of teachers and their invaluable legacy of inspiring youth.

2018 -- After nearly 60 years, the boarding program was reinstated and a new Residence Hall was built on campus. The five-story dormitory has a capacity of 112 students in grades 9-12.

2019 -- Construction of the new Kindergarten-First Grade Community was completed, allowing the school to expand enrollment at kindergarten from 72 to 96 students. The state-of-the-art facility was first used for Summer Program classes prior to the 2019-20 school year.

2020 -- A campus closure began on March 16, 2020, due to the COVID-19 pandemic. Online distance learning for the entire K-12 student body began on March 18, 2020, and continued for the remainder of the 2019-20 school year. The Class of 2020 returned to campus for Commencement, which was modified into a drive-in ceremony on the ‘Iolani School baseball field, limited only to cars containing graduating seniors and their immediate families.
Construction of two new Lower School buildings, the Kaneshiro Science and Innovation Center and the Sidney and Minnie Kosasa Performance Studios, was completed. The state-of-the-art facilities were first used at the beginning of the 2020-21 school year.

This list, compiled with assistance from sources in the ‘Iolani School Archives, is not definitive or all-inclusive; early information is often uncertain or conflicting.