Decoding DNA in the classrooms: 'Iolani helps other schools get a grip on the fast-moving field

Students in private and public schools are getting a rare chance to analyze the DNA of local plants, from backyard papayas to indigenous bacteria that thrive in lava caves.

The goal of the 'Aina-Informatics Network launched by 'Iolani School is to demystify genome science by giving kids hands-on research experience as well as an opportunity to explore ethical questions in the fast-moving field.

"This is a huge issue for this generation," said Timothy Cottrell, head of school at 'Iolani. "We're talking to them about the world in which they're going to live. You don't have to become a biologist to care about the ramifications of this stuff."

Breakthroughs in gene editing are analogous to splitting the atom and give rise to a range of social consequences, he said.

"We are teaching kids how to analyze DNA — not modify organisms or gene-edit," he stressed. "We want an informed population that can understand enough so that it's not scary and you can objectively evaluate things." 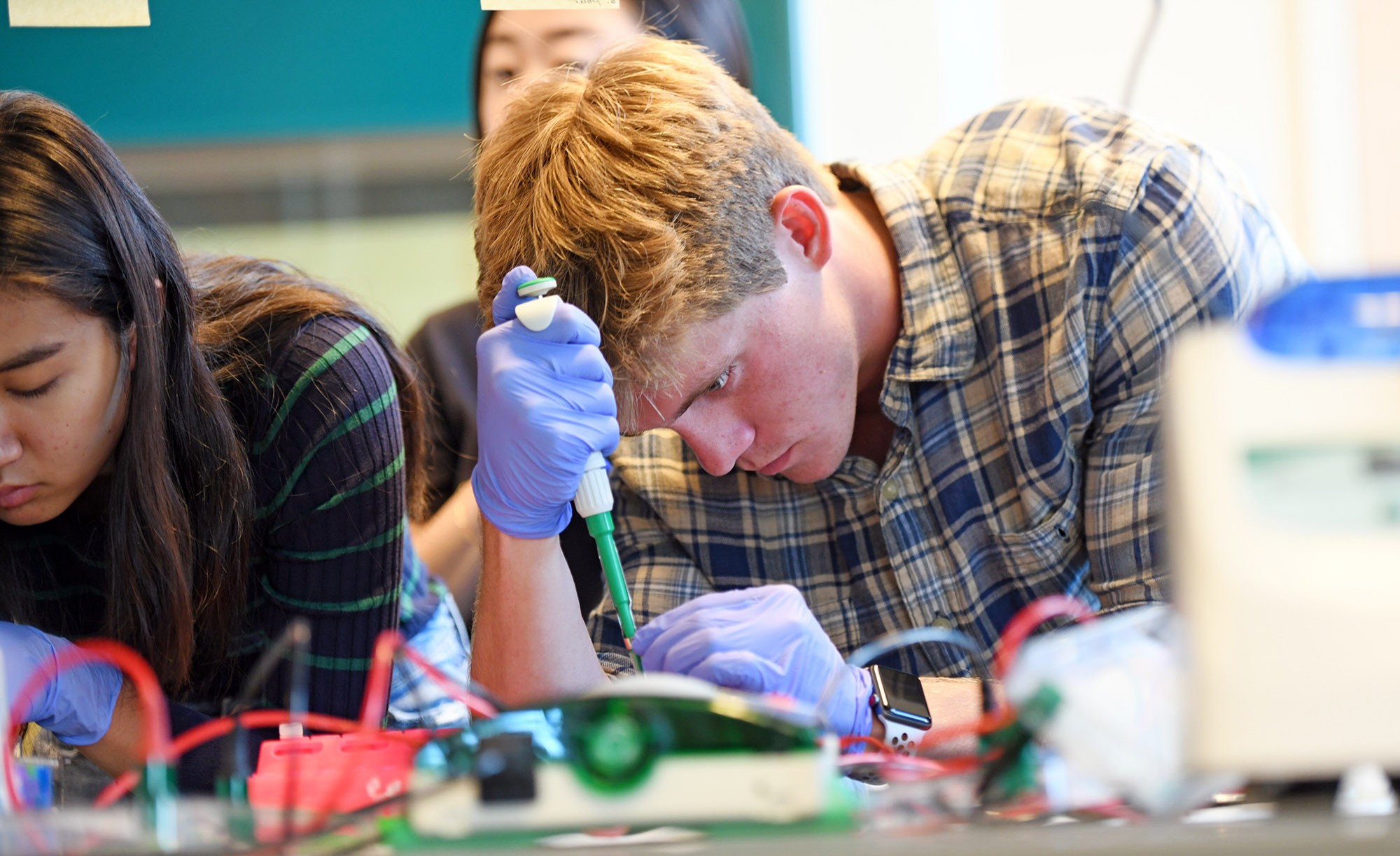 'Iolani recently landed a $182,200 educational leadership grant from the Edward E. Ford Foundation to build the 'Aina-Informatics Network of schools, and will raise funds to match that grant. The initiative offers expertise, teacher training and specialized equipment to partner schools to delve into local biodiversity at the gene level.

"In the past, whole-genome sequencing has mainly been done in professional or graduate labs," said Cara Tan, an 'Iolani senior. "To be a high schooler and get to use technology that we don't normally have access to, it's kind of empowering."

As part of an independent research project, she was the first student to try out the Oxford Nanopore MinION, a device that fits in the palm of her hand and can sequence DNA in real time. The high-tech tool is part of the mobile lab that 'Iolani is sharing with various schools.

Tong, a geneticist and researcher at the University of Hawaii, acts as a guide for teachers and students, adjusting lab modules to fit each school's needs and time frame.

And rather than a cookie- cutter lab with predictable results, students get to examine local organisms and figure out new things.

"When they get a TV dinner-type lab, the kids know what the outcome is going to be," said Yvonne Chan, the John Kay Teaching Chair in Research Science at 'Iolani. "The whole point of doing real science is you don't know the outcome. When they discover new knowledge, it's more engaging."

Taking a close look at a specific region of DNA in a papaya, for example, can reveal whether it was genetically modified to resist the ringspot virus. And as various classrooms weigh in with their data, they could chart how that variety has spread.

"Because the papaya is the only genetically modified crop that's been developed, from beginning to end, in Hawaii, it allows us to teach about genetics and genetic modification in a way that's accessible to our students," Tong said. "In fact, most of them bring the study materials from their own yards."

For an advanced lab unit on indigenous bacteria, students are examining microbes that were retrieved from deep in lava caves and prepared for analysis by University of Hawaii microbiologists Stuart Donachie and Rebecca Prescott.

Already, the teenagers have made a discovery of their own.

"When St. Andrew's students sequenced the genome, it turned out to be a novel bacteria, so they actually got to name it," Tong said. "They really are discovering new knowledge. Dr. Donachie has been extremely gracious in allowing the students to name the species."

The students chose a name in honor of their school motto, "Priory Pride," using the traditional Latin nomenclature for species, which has been submitted to an international consortium for review.

"I think we've done it again at Moanalua," Tong added. "It's quite likely that one of the three bacteria that we sequenced at Moanalua is also going to be a novel species."

The 'Aina Informatics Network is developing educational materials on ethical issues in biology so students can debate tough questions. Gene editing, for example, holds the promise of cures for some diseases and hardier crops but also possible peril in its power to create heritable changes in animals and humans.

A leading researcher in the field, Jennifer Doudna, executive director of the Innovative Genomics Institute in Berkeley, Calif., offered her support for 'Iolani's grant application and its effort to bolster understanding of genome engineering and education in bioethics.

Doudna, who happens to be a Hilo High School graduate, helped develop the gene-editing tool known as CRISPR-Cas9 and thinks there needs to be careful consideration of its implications. She calls for more public input into policy in her book, "A Crack in Creation: Gene Editing and the Unthinkable Power to Control Evolution."

'Iolani's genome science program got its start in 2017 with a donation from an alumnus in the biomedical field. It is the latest prong in the school's "citizen science" initiative that links various schools to tackle local problems, such as cleaning up the watershed by researching and removing invasive species, including spiny catfish, and monitoring bacteria in the stream.

Teachers often ask why 'Iolani is willing to share its expertise and equipment in what can be a competitive educational environment. Cottrell sees it as part of the school's mission to educate the children of Hawaii. The E.E. Ford grant envisions a ripple effect.

"Part of the E.E. Ford grant is to also equip other schools with this equipment so that they can serve as nodes in this network and help other schools," Tong said.

Chan is eager to share the spark she experienced not long after she got her undergraduate degree, before earning her Ph.D. in genetics from Stanford.

"I really clearly remember the first time that I extracted DNA and sequenced it and saw that sequence — it was from an African sunbird,"' she said. "It's amazing to be able to read the code of life. I think part of the program is showing kids, all kids, not just really resourced 'Iolani kids, that kind of 'Aha!' wonder."

Educators are invited to learn about 'Aina-Informatics at these events: